TAIPEI (Taiwan News) – Two women are fined for standing and talking in the middle of a scooter anti-rotation box (機車 待 轉 區) in central Taiwan on Sunday, March 28th.

On Sunday, a user from the Street Detailing (ichte 觀察 觀察) Facebook group posted a video showing two women talking while walking across a crosswalk in Taichung City. Then they suddenly turn left and stand in the middle of a left roller box for scooters and continue their conversation.

The owner of the video camera beeps irritably from his scooter. The women suddenly return in shock, notice their mistake and finally cross the street, luckily, before the light turns green.

In the caption above the photo, the scooter driver jokingly wrote from the women’s point of view, “I’ll tell you, the last time I stood here, I didn’t have a ticket, said Mermaid Man and Barnacle Boy.”

From 1985 in Taipei and finally banned across the country, scooters or motorcycles under 250 cc are not allowed to turn directly left on roads with two or more lanes. Instead, scooter riders must first go right to the intersection and perform a “fish hook” maneuver, essentially driving in front of the zebra crossing, then make a hard left turn into a special box designed for those who want to bend turn left. Then they have to wait for the green before going straight in their originally desired direction.

Chang Chun-kai (張 竣 凱), deputy head of Xitun Branch of the Sixth District, Taichung City Police Department, was quoted by UDN as saying that pedestrians who fail to obey signs, markings, and police orders are fined under traffic laws calculate from NT $ 300.

He said the incident took place at the intersection of Qinghai Road and Henan Road in Taichung’s Xitun District. Chang said no public reports have been received about the incident, but if it does, the perpetrators will be punished in accordance with the law. 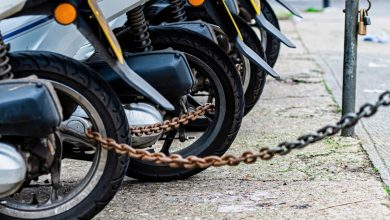