Upon becoming available for commercial use, Azure will support the digital platform VoloIQ, Volocopter’s UAM operating system, as well as its coming transition to autonomous operations.

Wingcopter, a leader in drone delivery, announced today the formation of a partnership with Atlantic Trust Holding subsidiary Continental Drones Ltd. in order to help establish delivery networks of thousands of drones throughout Africa, both strengthening existing supply chains and creating entirely new ones. Under the partnership, Continental Drones has become a Wingcopter Authorized Partner (WAPP) for all 49 countries in sub-Saharan Africa. The two companies seek to deploy 12,000 Wingcopter 198 delivery drones across the continent over the course of the next five years, which would be the largest ever commercial deployment in the global delivery drone industry.

Today, BRINC Drones announced the formation of a partnership with the Global SOF Foundation, the leading 501(c)(3) non-profit organization in supporting a worldwide Special Operations Forces (SOF) network. The Foundation works to build and grow an international network of military, government, commercial, and educational stakeholders for the advancement of SOF capabilities and partnerships in order to face global and networked threats.

In collaboration with its partners, the Global SOF Foundation serves to bring together the international SOF community via a range of network events, symposiums, and annual forums. Additionally, the Foundation plays a role in influencing national security policies and objectives in order to guarantee the appropriate resourcing of SOF.

Enter the DELTA™ Customer Appreciation Sweepstakes for a chance to win a Vue® TZ20-R!

At the PowerGen show today, Teledyne FLIR announced a new contest – and one customer will win a FLIR Vue TZ20-R, a radiometric thermal zoom camera payload. FLIR’s TZ20-R is a powerful sensor which brings more pixels to a zoomed in image. For a wide variety of commercial drone applications, a clear image obtained from a safe standoff distance can be critical: whether performing an industrial inspection on an electric power station, or critical surveillance in a law enforcement operation.

The world’s largest retailer Walmart drone delivery expands to cover millions of households and offer delivery of tens of thousands of SKU’s.

DRONELIFE spoke with Tom Walker, CEO of Walmart’s partner and service provider DroneUp about Walmart drone delivery expansion. After last year’s program launch, Walmart will expand to six states – Arizona, Arkansas, Florida, Texas, Utah and Virginia – by the end of this year. Drone delivery hubs will be established in at least 3 cities in each of these 6 states. 7 days a week, 12 hours a day, millions of eligible households will be able to order items totaling up to 5 pounds for 30 minute drone delivery, at a fee of only $3.99. “This is a serious milestone,” says Walker. “It’s exciting.”

ULTRA featured on Dawn of Drones this week, as we continue AAM and Vertical Flight Month (sponsor: Quantum-Systems Inc.)! Join Dawn with the “Guys from Jersey” Ray Adams and Ron Leach, Co-Founders and Leaders of the Urban Low Altitude Transport Association (ULTRA), a business league that promotes the aviation and infrastructure interests of companies, operating and supporting aeronautical vehicles. The 3 will discuss ULTRA’s past, current and future efforts to attain wider recognition of the importance of AAM and Vertical Flight to the nation – including their work to help enable a robust UAS research and development activity in Cape May, NJ and at the National Aerospace Research and Technology Park (NARTP) at the Atlantic City Airport.

This pairing results in a new method for public safety agencies to leverage small unmanned aerial systems (sUAS) for real-time situational awareness and evidence management. Axon Respond will enable command staff and 911 dispatchers to make use of the live streaming capabilities provided by Axon body-worn and in-car cameras, as well as the Skydio drone’s aerial view, within the same network. Footage captured by the Skydio drone will also be sent to Axon’s digital evidence management platform, Axon Evidence, where it will be securely stored for access and sharing.

The Dronecode Foundation is a vendor neutral organization supporting the development of the PX4 Autopilot, MavLink, Mav SDK, and Q Ground Control platforms. “Vender neutral” is an important concept as the drone industry hits its stride, Roche explains.

Vendors are working to solve critical problems in drone operations – and these solutions will benefit the entire industry. “In the drone industry, there are a lot of different ways to do the same thing. The idea behind creating a vendor neutral foundation is to create a safe place for vendors to come together to solve problems, without having to do all of the work on their own.

Today, Unilever’s digital storefront The Ice Cream Shop announced a partnership with drone delivery leader Flytrex for an ice cream drone delivery service available in all of Flytrex’s US locations, which include Holly Springs, Fayetteville and Raeford, North Carolina, and Granbury, Texas.

Orders from The Ice Cream Shop, placed through the Flytrex app, will be delivered directly to the yards of local residents, with a flight time of less than three minutes. Customers are provided with real-time updates over the course of the delivery process via the app, up until the order arrives and is lowered from the delivery drone by wire.

Fresh off the heels of Urban-Air Port’s Air One event in Coventry UK, the company has announced that it has chosen leading charge point operator Osprey Charging as one of its preferred partners to supply charging for non-aeronautical vehicles at its vertiport sites.

Over the course of the Air One event’s three week run, Osprey provided several stations for a showcase of on-site ‘charging as a service’. This will serve as a crucial component of Urban-Air Port’s non-aeronautical revenue, delivered via the Urban-Air Choice digital platform.

The D50 is HEISHA’s smallest drone dock yet, providing an automated charging solution for a wide variety of commercial off-the-shelf drones for remote operations. The D50 provides a drone-in-the-box, fully autonomous drone charging solution for a wide variety of commercial-off-the-shelf (COTS) drones using 2S-4S batteries, including DJI Phantom and Mavic Series as well as drones from Skydio, Autel, and Parrot. The new 50 cm charging pad relies upon an upgraded precision landing system, accurate to 3 cm.

Last Sunday, the University of Alaska Fairbanks flew an unmanned aircraft from the general aviation area of ​​Fairbanks International Airport, marking the first civilian large drone operation from an international airport in Alaska. The flight was the result of years of preparation and coordination with both the airport and the Federal Aviation Authority.

The UAF Alaska Center for Unmanned Aircraft Systems Integration’s 280 pound sentry aircraft took off from the airport’s general runway, following a designated flight path used for departures, arrivals and runway approach practice. The aircraft was controlled remotely by ACUASI personnel inside the airport’s ground control station, from which they communicated and complied with air traffic controllers just as other general aviation pilots.

Get more drone news of the week May 27 on DRONELIFE.com, or our YouTube channel DRONELIFE TV. 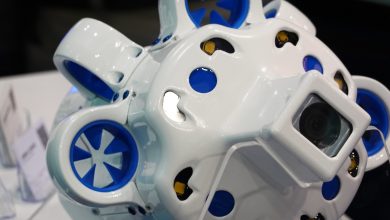 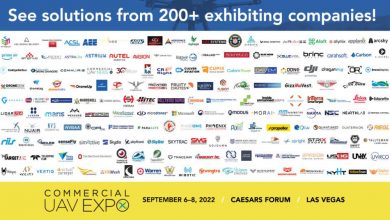 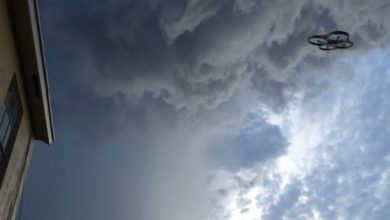