Yesterday it was reported that the battery of a Beam e-scooter exploded in a downtown Auckland street, luckily no one was on it at the time.

Apparently pieces flew away too, luckily there was no fire and no one too close, but imagine if someone had been on it? Or next to it?

It is sheer luck that it happened and that no one was hurt.

Beam isn’t the only one with defective scooters, Lime struggled in 2018.

In fact, Fire and Emergency warned in a report that there will be an increase in incidents related to lithium-ion batteries. And that is of course due to the fact that more and more devices are being supplied with electricity these days. Electric cars, vapes and e-scooters.

I’m actually not a fan of these scooters as they look like they’re zooming around town with little consideration for pedestrians.

I saw an elderly man at a busy intersection the other day get the horror of his life when he crossed the street and an e-scooter sped by and completely surprised him.

It almost blew him away, but the rider just whizzed past without a care. And that’s often the problem with things like that; they attract a certain cowboy wild west approach from the riders.

The scooter market has exploded (no lithium-ion pun intended) so we seem saturated with them these days.

The scooter companies are supposed to, but how often do you see scooters scattered on the streets that pose a danger to pedestrians. It has to be an absolute nightmare for anyone with visual impairment.

I also think the rules around them are too loose.

Any of this happening? Who is checking? You don’t even have to wear a helmet on it. I mean, it’s recommended, but it’s not mandatory.

So we have an abundance of these things buzzing through our cities, lying on our sidewalks, and now exploding.

By the way, do you know what happens if a scooter explodes? You can report the malfunction online. If you drove with it, you are eligible for a refund. And just be thankful it didn’t tear your eyes out when it exploded, I guess.

I wasn’t a fan of e-scooters at all; I’m even less of a fan now. 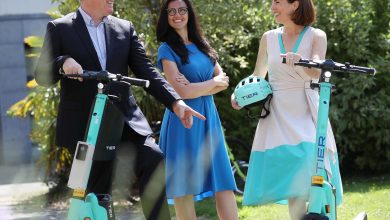