Watch: Thieves grab e-scooters from commuters at the train station

This is the shocking moment when three hooded thieves stole an e-scooter from a commuter in a train station before fleeing.

Footage shows one of the thieves slapping the victim in the face – causing him to fall to the ground and clutch his cheek – as he tried to reclaim his scooter from the trio.

The thieves, all dressed in black hooded coats, are then seen running away from the man as he chases after them, with one driving the victim’s e-scooter out of the train station.

The thieves took the e-scooter from the man at Luton train station. (SWNS)

The victim suffered minor injuries but did not require hospital treatment.

A witness said about 20 fellow commuters watched the ordeal unfold at Luton Railway Station, Bedfordshire, at around 5:30 a.m. on Wednesday morning.

The witness, who refused to be named, said, “Nobody responded because it happened very quickly.

“The three boys walked past the victim and had a problem for a few moments.

“Then they started scolding and yelling at each other very quickly.”

Bedfordshire Police confirmed they had received a theft report related to the incident.

A police spokesman said: “We were called just before 5:45 this morning (Wednesday) about a report of an e-scooter theft at Luton train station.

“The victim was left with minor injuries but did not need hospital treatment.”

The victim was knocked to the ground before chasing after the fleeing thieves. (SWNS)

The case was forwarded to the UK traffic police, who confirmed that investigations into the incident are still ongoing.

In July last year, trials of e-scooter rental programs were approved in cities across the UK.

Figures released by the Met Police in November showed that e-scooter crashes in London rose from four in 2018 to 32 the following year.

Police data released in April also revealed that e-scooters are used in hundreds of criminal offenses, including robbery, break-ins and antisocial behavior. 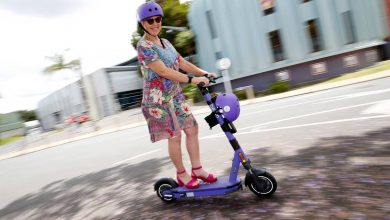 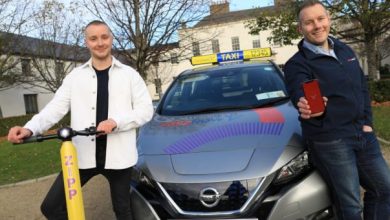