Britain’s Got Talent aired a terrifying moment tonight as a young boy fell off his scooter during a dangerous trick on the ITV talent show, as it made its return to screens tonight

The video will auto-play soon8thCancel

Britain’s Got Talent aired a shocking moment in the launch episode tonight.

Scooter Boys – a young scooter quartet, aged between 6 and 10 – took to the iconic London Palladium stage in an auditioned aired tonight, as the ITV show returned to screens after a two year hiatus due to the pandemic.

The four young boys appeared on the show for a special – and dangerous – scooter trick, as they attempted to do lots of jumps on ramps and other tricks in a bid to impress the four judges, Simon Cowell, Alesha Dixon, Amanda Holden and David Walliams.

There was a horror fall during the performance
(

However, as one of them took to the ramp, it all went horribly wrong and little Austin slipped up and ended up falling over. There was silence in the theatre, as someone rushed on to pick him up and dragged him off the stage.

The other boys stood at the top of the ramps, not sure what to do as the judges and hosts Ant McPartlin and Dec Donnelly tried to reassure them it would be fine. There was a look of horror on their faces as a medic rushed on to check on the little boy.

It was touch and go over what happened until Simon got the nod from the production staff that the little boy was OK.

The four boys impressed the judges
(

Relieved, Austin received a huge cheer when he returned to the stage and the boys started the act again.

As part of their stunts, they began their tricks again, and Austin got an extra loud cheer as he successfully completed the jump, with the audience – and the judges – thrilled for him. In one daring stunt, one of the boys laid down in the middle of the ramp as the other soared over him with his scooter, leaving everyone screaming for more.

The four boys ended their act by holding their scooters above their heads as they were met by raucous applause.

Giving his verdict, Simon gave them a standing ovation, as he said: “Good for you for getting back on after that, that took guts.”

“God knows where you parents’ hearts were, my heart was in my mouth throughout that. I loved the camaraderie between all of you, all of it was incredible,” Amanda said as she breathed a sigh of relief.

The Scooter Boys bagged four yeses from the judges and made it into the next stage of the competition.

*Britain’s Got Talent continues this Sunday at 19:35 on ITV and ITV Hub. 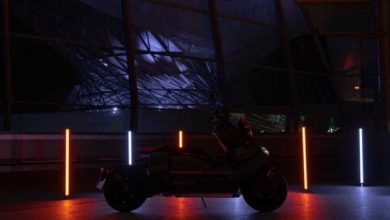