Doctors at Helsinki University Hospital are calling for a ban on the use of electric scooters in the city on weekends.

Vehicles are still overrepresented in accident statistics in Helsinki and Uusimaa Hospital District (HUS), although a decision was made last month to reduce speed in some areas and time periods.

According to HUS, more than two-thirds of the e-scooter accidents treated in the trauma ward at Meilahti Hospital this summer occurred at night, and 80 percent of the patients who sustained head injuries in e-scooter accidents were on this time drunk.

The crashes have continued despite two of the largest e-scooter rental companies agreed in early July to reduce the speed of their two-wheelers at night in urban areas.

According to HUS statistics, around 70 percent of the e-scooter accidents treated in the Meilahti small trauma ward occurred between 10 p.m. and 7 a.m. this summer.

Arja Kobylin, Chief physician for acute care at the HUS, calls for the Minister of Transport Timo Harakka to prohibit the use of electric scooters on weekends. The minister is expected to meet again with e-scooter companies at the end of August to discuss safety. A young woman was killed in an e-scooter accident in the southwestern city of Turku on Wednesday.

Kobylin also argues that drunk driving should be punished more severely. The vast majority of head injuries in e-scooter accidents treated in the Meilahti Minor Trauma Unit were alcohol-related.

HUS said it needs to hire additional staff for the weekend just to deal with e-scooter crashes.

Accordingly Gustav Lehmonen, a doctor at the Meilahti small trauma ward, a ban on the use of e-scooters between 11 p.m. and 5 a.m. could prevent a significant proportion of the serious injuries.

In June, Lehtonen estimated that a quarter of mildly trauma patients admitted to the Meilahti emergency room were injured in e-scooter accidents.

Kobylin said that of 10 e-scooter accidents handled by the Minor Trauma Department last weekend, all but one occurred between 9:00 p.m. and 5:00 a.m.

Six of the ten patients suffered head injuries. Three of them were found to have alcohol in their blood, but not all were tested.

“The speed limit is not enough,” said Kobylin.

Between June 20 and July 21, a total of 82 e-scooter accidents and 56 bicycle accidents were treated in the Meilahti trauma station. The accident rate has fallen slightly since May and June.

According to Kobylin, the average age of people involved in e-scooter accidents is around 30 years, and some were over 70 years old.

Drunk drivers will only be penalized if they cause injuries

Helsinki Police mainly keep records of e-scooter accidents leading to criminal complaints, which are a few on average each month.

E-scooters are considered to be light electric vehicles and are subject to the same traffic rules as bicycles. For example, driving on the sidewalk or while drunk is prohibited.

According to the police sergeant Pasi Tuominen, many users seem unfamiliar with the rules. The police are constantly receiving reports of e-scooter drivers driving on the sidewalks.

In addition to better information, the solutions would also include limitations on driving areas and speed limits, especially at night, he says.

“Sometimes e-scooter companies also place scooters where there are no bike paths nearby. Users are unlikely to drag the scooter onto a bike path, ”he said.

E-scooters for rent in Helsinki are for single use only. However, it is common to double them up.

Drunk e-scooter drivers who cause dangerous situations or near-misses can be fined for drunk driving. Fines start at 40 euros.

If a drunk does not cause an accident, the police cannot intervene. Alcohol tests are also optional for e-scooter drivers.

According to Tuominen, some basic rules of thumb can reduce the number or severity of accidents with e-scooters:

“Ride at a safe speed, stay away from sidewalks, use bike paths, don’t go one-way in the wrong direction, don’t pick anyone up, and park sensibly. And remember to wear a helmet. ”Said. 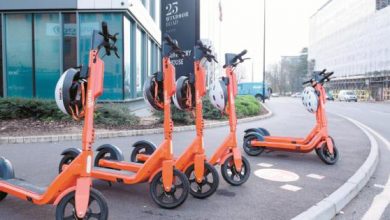