Drone football. It is one thing. And it’s not just a sport that could be featured on ESPN 8, “The Ocho” (like Dodgeball). It is an innovative opportunity to inspire young people and the young at heart through exciting team competitions for MINT, in particular IT and aerospace technology.

Kyle Sanders, US Drone Soccer vice president of education and development, a US Air Force Academy graduate and combat veteran / former flight instructor for the US Air Force, said, “At US Drone Soccer, we combine physical education and STEM education. As with any traditional sport, academic and youth leagues attract a fan base and future players to the sport. But aerospace careers are much more than just being a pilot. We want students to develop other skills that can lead to future careers. “

The sport itself began in South Korea and is now spreading across Europe. Sanders says he’s happy to be leading the adoption process here in North America.

How exactly does it work? Think of Quiddich from Harry Potter. There is a 10 by 20 foot indoor mesh arena that encloses the play area and is specially designed for teaching in a classroom. Two teams collide as they attempt to help their designated striker fly through the other teams’ goal. Sanders: “Drone Soccer provides an accessible team environment for beginners that is a spectator-friendly, indoor-safe activity that schools without an FAA license can easily conduct. We think Drone Soccer is a great way to build the Youth Foundation for Drone Sports and Aviation Career Pipelines. “

Before the teams can fly, they must first build and code. This is where the STEM aspect comes into play. As an introduction to the tech, students take their kits and build their own drone soccer ball. Apart from a screwdriver, no dangerous soldering or other special tools are required. Teachers and students get everything they need to be successful in the classroom. The drone itself, designed by US Drone Soccer and manufactured by iFlight, is an injection molded exoskeleton that is tough and durable. Most importantly, it is forgiving of young pilots who may crash without spending a day on repairs. Sanders explains, “These things are built to collide with each other. Drone football is a full contact sport. “

The program uses the open source flight software Betaflight for coding. This is the same software that virtually every drone racer uses. It’s a little more complicated than flying with a smartphone app because students will initially fly it by hand. This requires that they learn the basics of calculation by the air traffic controller, a practical study of computer science in avionics or “avionics”.

In addition to building and coding the drone ball, students can essentially invent new strategies and tactics for the sport. As an Air Force pilot, Sanders knows the importance of teamwork and communication. For Drone Soccer these still have to be defined. He explains: “To be honest, we’re not sure which team approaches will be successful in this sport. COVID paused global competitions. We’re all forming teams right now and doing all the little testing events that we can safely do. We are excited to see what formations and games these new pilots have! “

Sander’s mission is to make drone football accessible and inviting. He ponders: “I found it too difficult to get into drone races. And I am a professional pilot. I mean the hobby itself: what to buy, what to be compatible, where to race and not a supporting community. Individual sports are not for everyone and I want a team strategy. Drone football is a sport that many drone pilots and newbies can really look forward to. “

While Drone Soccer has great aspirations, the cost of entering classrooms and common areas isn’t high. The Drone Soccer Ball will retail for around $ 180 alone, much like other educational drones like the DJI Tello. To give a student everything he or she might need, including a toolkit, batteries, radio controls, and spares, the entire package costs less than $ 500 to get started. This is a bargain compared to similar robot teams or traditional youth sports.

Schools are planning both classroom enhancement and practice arenas, as well as museums and drone venues in the community to host official drone soccer arenas. Semi-permanent exercise arenas cost around $ 2500. A professional collapsible arena costs about $ 10,000. The company will soon release an automated scorekeeping system that will be built into the arenas. Venues with arena setups can use Drone Soccer for visitor experiences and summer camps and act as accelerators for league events and tournaments in their communities.

Those in charge of Drone Soccer find that many schools have little money. You will work with teachers and other organizations to investigate grants and other funding opportunities. Sanders announced that two high schools in Colorado’s District 11 were fully funded by a grant from the local AFCEA Educational Foundation. He explains, “We rated the program better than other robotics programs. Because of our focus on the aerospace industry, we have worked successfully with CTE (Career and Technical Education) programs. This opens up additional financing options and, above all, does not take advantage of the schools’ limited discretionary budgets. “

US Drone Soccer plans to roll out soon in selected cities where enough schools are ready to form a league. Since the company is headquartered in Colorado, it took advantage of its strong local partnerships to get started. The Wings Over the Rockies Aerospace Museum in Denver is the first venue to host an official drone soccer arena, which will arrive later this month.

In addition to the national rollout this year, Sanders reports that they are already working with Drone Soccer programs in other countries, particularly in Spain, and are in the planning phase of international tournaments as soon as COVID allows. Sanders explains, “We want to provide students with an obvious aerospace career path that they enjoy doing. To do this, we must immediately offer the educators a complete solution. As a natural extension of this success, we are working hard to drive the adoption of the youth drone sport that will soon be the fanbase of our international teams. “

Venues and school districts interested in helping organize a program can contact Sanders and his colleagues at US Drone Soccer directly with plans to open in August. They offer continuing education opportunities for educators and everything that is needed to get started. Get ready to crouch, dive, dive … and roar!

Dawn MK Zoldi (Colonel, USAF, retired) is a licensed attorney with 28 years of active military and federal service in the Air Force Department. She is an internationally recognized expert in the law and politics of unmanned aircraft systems, a columnist for Law-Tech Connect ™ for Inside Unmanned Systems magazine, recipient of the Woman to Watch in UAS (Leadership) Award 2019 and CEO of P3 Tech Consulting LLC. You can find more information on their website at: https://www.p3techconsulting.com. 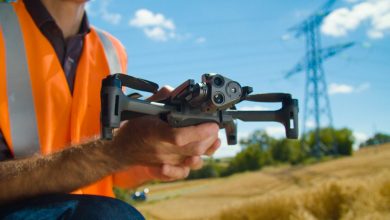