Read or listen to all of the headlines in one place: excerpts from the DRONELIFE drone news of the week, July 15. Click on the links below to read or listen to each story in full.

Dronecode and the PX4 Open Source Drone Platform: the Benefits of Open Source, and What Comes Next

The Drone Code Foundation, a non-profit organization administered by Linux Foundation, leads the development efforts for PX4, the leading open source autopilot software for uncrewed vehicles. PX4 provides a standard to deliver a scalable hardware support and a software stack. It evolves through a collaborative ecosystem of over 10,000 developers and commercial adopters that both build and maintain the software.

President Biden has appointed Phil Washington to be the new FAA Administrator. If approved by the Senate, Washington will step into the position vacated by Steve Dickson at the end of March, roughly halfway through his term. An Army veteran, Washington is currently CEO of Denver International Airport. Before his current position, Washington held the top spot at the Los Angeles County Metropolitan Transit Authority for six years. Washington has co-chaired the Biden/Harris Infrastructure Policy Committee. He also led the Transportation Department transition team for the Biden/Harris administration.

Japan’s HexaMedia has completed a survey of a live volcano, using a drone. The volcanic survey was sponsored by the Japan Meteorological Agency as part of a larger disaster mitigation program. HexaMedia investigated a volcanic crater 2,500m above sea level. The flight was completed beyond visual line of sight (BVLOS), using UgCS for 3-dimensional flight route planning and automatic navigation. HexaMedia completed the mission at night, as sunlight affects the surface temperature of active volcanoes.

The test saw a full-scale AIR ONE prototype take flight in Megiddo, Israel, where it completed multiple hovers over the course of the day and the subsequent two weeks. The aircraft operated as intended, safely lifting off, hovering in place, and returning to the ground. Additionally, AIR ONE’s energy use proved its ability to meet expected performance metrics. The company intends to expand to full flight envelope testing throughout 2022.

Accucode on Dawn of Drones This Week: Innovative Technology Solutions for the Drone and AAM Industry

Accucode has custom designed, acquired, installed, managed, and supported a wide variety of technologies so customers can free up resources to focus on their core businesses for over 25 years. Technology is always disrupting, so being a disruptor is part of this company’s DNA. This is the team that comes in and changes whole industries through the application of technology. Learn about how this innovative company applies its award-winning services and solutions to the drone and AAM industry with “technology at the speed of business.”

Drone autonomous flight and landing specialist Wonder Robotics has announced the closing of $4 million in a seed round led by Elron Ventures alongside Besadno Investment Group.

The funds will go towards the expansion of operation and marketing efforts, as well as the development of new technology for further applications. The currently available beyond visual line of sight (BVLOS) technology has yet to be perfected, unable to guarantee sufficiently safe autonomous drone flights and in turn resulting in difficulties for the commercialization of drones. To address these issues, Wonder Robotics created its proprietary “WonderLand” solution for accurate autonomous landings, capable of being installed on any drone.

Today, urban air mobility (UAM) leader Volocopter announced a partnership with Singapore’s Institute of Technical Education (ITE) for the launch of a VoloCity public exhibition featuring free guided tours. This will be the first-ever exhibition from Volocopter to feature its commercial air taxi model in Asia, as well as its first long-term exhibition open to the global public.

Smart airspace security leader Dedrone announced its closing of $30 million in an oversubscribed Series C-1 financing round. The round was led by public safety technology company Axon, with participation from Aqton Partners, Menlo Ventures, Felicis Ventures, Target Partners and individual Silicon Valley entrepreneurs. This latest round of funding follows this past December’s Series C round, which brought in $30.5 million. Dedrone will leverage the funding to further expand its team globally, establishing a second office in California as well as advancing its multi-sensor fusion airspace security solution. 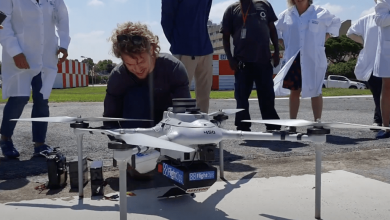