The US Department of Defense (DOD) has clarified its position on Chinese drones. In a DOD statement on DJI drones, the agency stated that “systems manufactured by Da Jiang Innovations (DJI) pose potential threats to national security.” (Read the full statement here.)

The statement appears to be in response to a recent Pentagon audit that examined DJI’s government version drones. The audit determined: “The tested DJI Government Edition versions showed no malicious code or intent and are recommended for use by government agencies and armed forces working with US services.”

This review created some confusion as to whether or not DJI drones were approved for government purchase without exception to the rule. It appears that the DOD department that performed the audit didn’t get the proverbial “No DJI” memo – but they got it now.

“A recent report showed that certain models of DJI systems were approved for procurement and operation by US government agencies and agencies,” the DOD statement said to DJI. “This report was inaccurate and uncoordinated, and its unauthorized publication is currently under review by the department.”

The ban on Chinese-made drone technology has a long history – but since the first memo questioning the safety of Chinese drone platforms, Congress has passed law formalizing the ban. From the DOD statement:

In 2018, the DOD banned the purchase and use of all commercial off-the-shelf drones regardless of manufacturer due to cybersecurity concerns. The following year, Congress passed law expressly prohibiting the purchase and use of drones and components made in China. DOD complies with Section 848 of the FY20 National Defense Authorization Act (NDAA) and additional guidance from Executive Order 13981.

You can find the text of the NDAA here. Departments can request an exemption from the rule in certain circumstances, and some agencies may be able to use off-the-shelf commercial platforms. However, as the DOD statement makes clear, exceptions are made on a case-by-case basis.

“Mitigating the threats posed by small UAS, including DJI systems, remains a priority across the department, and the DOD continues to ensure that existing policies remain current and properly implemented,” the DOD statement said. 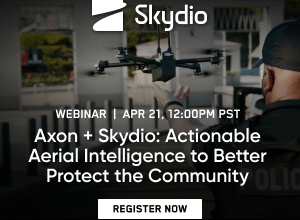 AUVSI Skydio webinar with Axon about drones for the police