Staying alive as a small company in an emerging industry is always a challenge. Companies that have been doing it for 10 years or more and growing in the process are always worth a look. Success is not always a straight path, and it requires flexibility and determination to get things done in order to survive. NH-based ArgenTech (AgTS) is a perfect example of building a drone business by evolving to meet customer demands.

AgTS doesn’t have the word “drone” in their name, and that’s because they didn’t start out as a drone company. The company was founded in 2009 by a group of ex-military personnel and began working with camouflage paints on submarines on an SBIR grant. In 2011, however, the company received a contract with Insitu to work with ScanEagle: fly, wait and act as site manager wherever ScanEagle was deployed. The group had the necessary military experience in manned and unmanned aviation. However, the ScanEagle contract marked the beginning of a focus on drones for AgTS to meet market needs for experienced operators of large UAS. A few years later, the company received a contract in Colombia to map difficult terrain with LiDAR on a drone basis.

Bob Meyer, AgTS president of Flight Services, said the work was challenging – but it broke new ground for commercial applications. “We worked very closely with the Colombian CAA [Civil Aviation Authority] On the project. This has made us great experiences. In collaboration with LiDAR, we have shown that we can map the terrain under the canopy. Nobody worked [drone-based] LiDAR at this point. “

Establishing a drone business: from service provider to drone manufacturer

AgTS continued to build a team of manned aircraft and unmanned pilots, many with military backgrounds. (The company has won many awards for its military personnel support and accommodation policy: it is a practice that is not straightforward from an operational standpoint, but has resulted in a team with extensive experience in the field.) Customer base serving as a service provider to large UAS, but a turning point for the company came 3 years ago when they received a fire survey contract from the US Department of the Interior. The drone manufacturer that they wanted to work with changing hands – and that couldn’t deliver. At that point, AgTS decided to build its own large UAS for work: the AgTS FireEye.

Rita Castonguay-Hunt, AgTS program manager, says it was a natural choice for the company. “Much of what we have done in recent years has been needs-based,” she says. “We had a supplier in line, but when it came down to it, they couldn’t deliver – so we had to do it.”

Using an imported airframe and an open source operating system from Pixhawk, the FireEye is specifically designed for fire investigations. AgTS ‘Jeremy Jones says the company quickly established a manufacturing system that was designed for safety and standardization. “The manufacture of the aircraft itself is a complete, controlled process – we have complete process control methods,” says Jones. “Standardization is our ultimate goal – the aviation industry is successful at standardization, there is no reason the UAS industry cannot do the same.”

After developing the aircraft, the company knew they needed to develop training tools that meet their own standards. They built their own training aircraft – and developed their own simulation program. It is exactly the kind of training you would expect from a company of manned airmen and military personnel. “We developed our training program out of necessity,” says Castonguay-Hunt. “Our program mimics the training we received as chief pilots – the manned aerospace model that we know is safe. We just applied it to Argen Tech. “

With the AgTS aircraft, the team of trained service providers is ready to respond 365 days a year. “We are staged on the west coast with two birds and a truck,” explains Castanguay-Hunt. “When we get the call, we’ll fly whoever is on the watch list to meet the truck. Most of the time, response teams want maps and GIS information. The DOI managers with us will ask us to map the line of fire. Use EO / IR to check for anyone who has a missing firefighter. and map any hot spots outside the line of fire that could re-ignite. “

“We don’t fly in the pile where the tankers fly in and out,” she says. “We usually fly at night to avoid manned flight.” In addition to the aircraft, the project requires sophisticated software and sensors. From the control vehicle, the team members place geotagged points on the sensor computer so that the response teams have up-to-date and accurate map information.

AgTS continues to grow. “We have built an impressive aircraft that just keeps getting better,” says Castonguay-Hunt. “We have developed a training program that I can measure myself against.”

“This year we will be expanding into other states and markets. There are many other places in the world where wildfires happen that we could help, ”she says. Regardless of future customer needs, AgTS is ready to meet them.

“We’re not a ‘one size fits all’ company. We’re a ‘let’s make this happen’ company,” says Castonguay-Hunt. “We have know-how that is currently unparalleled in the industry – and we are ready to share it.” 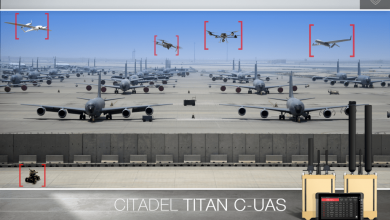